Mike S. was a patient who came in with shoulder pain that was inhibiting his strength training program. I’d like to share his success story with you. Read on as this Chicago Chiropractor Talks Performance.

Mike is a high level kettlebell athlete. He competes internationally and he is an amazing athlete. When he first came in to our office he was having shoulder pain that was inhibiting him from performing certain movements. Upon examination it was discovered that a tendon in his shoulder was inflamed and damaged causing his pain. In addition to that his middle back had spinal restrictions impeding the movement in his shoulder which ultimately is what resulted in the tendon issue. Also, his pelvis was misaligned with one side being much higher than the other. I started Mike on adjustments to fix the above mentioned issues and also had him modify his training. I told him, like I tell all my active patients, staying active will help you heal faster, we just need to work around the current issues.

Fast forward to one month later and not only is Mike back at it 100%, but he competed in a local event here in Chicago at Evolution Fitness, he set a personal best record in his event! Mike continues to receive chiropractic, not because he is in pain, but because he realized his body performs so much better when his spine is free of stress and tension.

This is much further reaching than even athletic performance. I also work closely with many members of the Chicago Lyric Opera. Opera singers literally use their body as their instrument, and a high functioning body is a top priority for them. Have you ever been to the opera? These professional singers are absolutely amazing! I have been fortunate to work with over 20 of the professional singers from the opera house.

Performance comes in many different forms and varies based on individual needs. How are you performing? It may not be athletics or singing, but maybe you’re a teacher, stay at home mom, or in the professional world….it doesn’t matter. We all need to perform in some manner. Let us help you perform at your best!

Back pain Chicago 2017 is what we will be discussing today. What does that even mean, you may be thinking?

Back pain is the 2 reason people visit a doctor, second only to the common cold. Research shows that 80% of Americans will suffer from back pain in their lives to a degree where they will miss work. The trend I am noticing in my Chicago office is that the numbers are on the rise. In today’s day and age people are busier, more stressed and less physically active than ever before. All of these factors, along with many others contribute to back pain and degradation of overall health.

Back pain is not always associated with an acute injury like most people think. Back pain usually builds over the years. It begins with dysfunction in the muscles and spine that the person is not usually aware of. Or, sometimes they are aware of some twinges, but chose to ignore those signs. What ends up happening is eventually a small stress or activity will then be the ‘straw that breaks the camels back’ so to speak. I hear stories like this all the time. “I slept funny and now I can’t move”, “I bent over to pick up a pencil and couldn’t stand back up”, or my favorite, “I sneezed and my back went out”. These are just a few examples of the stories I hear and it’s easy to see how someone may thing this offending activity caused their back pain, but in reality the issues most likely started a long time ago.

The best course of action to take is to be Proactive as opposed to reactive! Don’t wait for a crisis and don’t ignore the small signs and symptoms your body may be giving you. The small things lead to the big things.

If you are in pain or if you are looking for prevention, come see us! I have been helping people stay healthy, strong and active since 2006!

“Why do Chiropractors take X-rays?” is a common question I get asked in my office here in the Sauganash neighborhood of Chicago. Chiropractic X-rays are often times necessary to evaluate your spinal health, alignment, and spinal condition so that I can decided what is the best course of action to take regarding your health.

In the above video I discuss a specific case where a gentleman came into my office with neck pain that started that morning. He stated he never had neck pain before, but he slept in a funny position and woke up with neck pain. Upon examination I determined taking X-rays was clinically necessary to get more information about what was causing his pain. He did not want to do the X-rays, he just wanted an adjustment.

After explaining to him that I did not want to guess with his health and that the X-rays were necessary to move forward he agreed.  It turns out he had metastasized cancer that had traveled to the bones of his neck. Meaning, he had cancer somewhere in his body that had spread to the point that it was now in his neck bones. If I would have adjusted this gentleman he could have had serious problems after. It is critical to have chiropractic X-rays taken when working with the spine as it a very important structure in the human body. The spine plays many different roles in ones overall health and well-being.

Check out the video below hear “Chicago Chiropractor Talks Vitamins”

END_OF_DOCUMENT_TOKEN_TO_BE_REPLACED

One of the easiest ways to improve your overall health is to stand for better posture.  The human body is designed to move, and keep moving. We as a society have come a long way from this. We are now spending an average of 13 hours a day sitting on our butts! As a result of all of this sitting we are becoming weaker, more overweight, and suffering from back pain at all time high levels. 86% of all Americans will suffer from low back pain to the extent that they will have to miss work. Back pain is now the second most common reason people visit their Medical Doctor after the common cold.

Many people, corporations, companies and myself are switching to standing desks. Studies show standing helps employees to be more productive, have more energy and have less missed days of work. From a physiological standpoint, standing lowers blood pressure, improves posture, and keeps your spinal muscles strong. Standing while you work is a win-win for everyone involved.

Since switching to my standing desk, I have actually not lowered once to sit down. It has the option to be lowered, but I find no desire to sit down anymore. It does take some getting used to, and you may feel soreness in your feet, knees, hips and lower back when you first start because all of those muscles are not used to having to work so much. Stay the course though, because after a week or so everything starts to feel much better.

Do you stand for better posture? Have you switched to a standing desk? I’d love to here about what you notice is the difference?

There is no need to cancel your adjustment appointment when you are sick. Chiropractic while sick is actually a great idea! Your immune system is controlled by your nervous system. If you have stress on your spine and nervous system it will effect your immune response in a negative way. Getting an adjustment while sick can help you to fight infection and feel better sooner.

Many people feel bad coming into our office while they are sick because they don’t want to get us sick. I get it, thank you for your concern, but it is unnecessary! We are exposed to sick people all day long, and being that we live the chiropractic lifestyle we rarely get sick. It is more important that you keep you appointment so we can get you back on track and get you back to health!

Let’s talk about everyone’s favorite topic…Glutes! That’s right, those muscles on your backside that are supposed to be strong, active and well developed. END_OF_DOCUMENT_TOKEN_TO_BE_REPLACED

Sitting is the new smoking. This statement is buzz-worthy at the moment, and for good reason. The newest research is showing us how detrimental sitting actually is to our health. Read on as this Chicago Chiropractor Talks Sitting further. END_OF_DOCUMENT_TOKEN_TO_BE_REPLACED 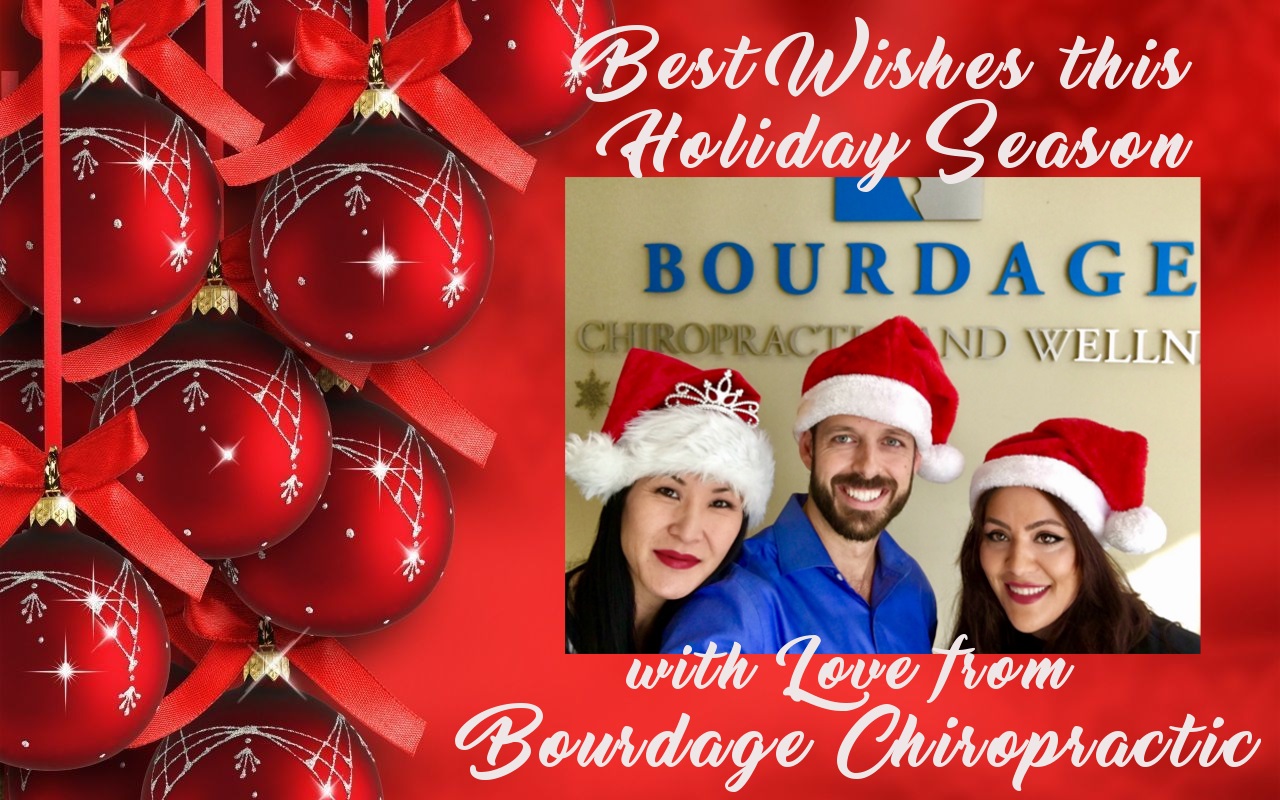 Happy Holidays from our family to yours! Wishing you happiness, health and ridiculous success in 2017!

Let’s work together to make sure you have the best 2017 possible. Whatever your health goals may be, feel free to discuss them with Dr. Bourdage and let’s formulate a plan to make sure you reach them!

A good goal should be specific, have a timeline, and a reward at the end of it. For example, just saying I want to lose weight in 2017 is not very motivating. But, if you were to say I want to lose 20lbs by April 1st and if I do I will reward myself with a trip to Mexico… now THAT is a goal!

I know the holidays can be a time when many people put their health on the back burner; don;t let that happen. Go into the New Year with momentum and watch 2017 be your best year yet.

Chiropractic and pregnancy are a match made in heaven. Think of the pelvis of a pregnant woman as a basketball hoop, and the baby as the basketball. If the hoop is level, balanced and in alignment it makes it very easy for the ball to go through the hoop. Now, imagine that the hoop is crooked and unbalanced, it makes it very difficult to get the ball through the hoop.

To improve your chances of having an easier and uncomplicated delivery it’s critical to have your pelvis in proper alignment. This is why women flock to the chiropractor during pregnancy!

Women also visit our chiropractic office in Chicago during pregnancy to help with the general aches and pains associated with pregnancy. The most common ache and pain during the third trimester is sciatica. We have great success helping women with Sciatica, which could be a blog topic all on it’s own. Sometimes women will visit us because their baby is in the wrong position, and they have heard chiropractors have a technique to get the baby into the right position. Whatever your reasons may be, make sure you are under regular chiropractic care during your pregnancy to ensure you have the best labor and delivery possible.

After pregnancy is also a great time to visit us at Bourdage Chiropractic.  The postures women find themselves in while nursing or carrying around a heavy diaper bag and car seat can really wreck havock on your spine. The aches and pains pf being a new mom are not fun. This should be one fo the most beautiful and amazing times of your life, don’t let pain get in the way of it! It is important that you feel your best so you can BE your best for your new bundle of joy.

The human body undergoes a lot of challenges during and after pregnancy. Chiropractors are highly trained to help you through this time and keep you as strong and healthy as possible. Let me know how I can hep!